Home » About Us » History

Our past and our future… 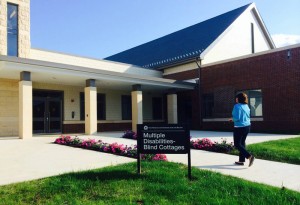 In 1853, Franklin Pierce had just been elected as the 14th President of the United States, Abe Lincoln was still a young congressman in Illinois, and most people would scoff at the very suggestion that, in the very near future, Americans would turn against Americans in a bloody Civil War. It was also the year that our school, known as the Maryland Institution for the Instruction of the Blind, first opened its doors in downtown Baltimore.

Starting with a small group of students, the school had three superintendents in the first 11 years. The first superintendent was David E. Loughery who was a blind graduate of the Pennsylvania Institution for the Instruction of the Blind. It then settled into a period of tremendous growth under the direction of Fredrick Douglas Morrison, who was superintendent from 1864 to 1904. A national leader in his profession, instrumental in the founding of the American Association of Instructors of the Blind and an early proponent of a then controversial new system called “braille”, Mr. Morrison lead the nation by example.

In 1868 he moved the campus to much larger quarters on North Avenue and changed the name to The Maryland School for the Blind. In 1872, when segregation was still common practice, he was a founder of The Maryland School for the Colored Blind and Deaf and served as the superintendent of both schools. John Frances Bledsoe became superintendent in 1906.

In 1908 Mr. Bledsoe moved the school to its present location in the Northeast corner of Baltimore City. The leadership at The Maryland School for the Blind reads like a Who’s Who in Education for the Blind in America. Francis M. Andrews, Herbert Joseph Wolfe, Richard L. Welsh and Louis M. Tutt were all internationally recognized innovators who moved the school forward into the 20th century.

The Maryland School for the Blind has come a long way since 1853!  We are extremely proud of our history and we hope you will join us in celebrating these significant milestones!

1853 The Maryland Institution for the Education of the Blind is incorporated as a private, state-aided school.

1885 The School’s name is changed to The Maryland School for the Blind.

1887 Superintendent Morrison is a founder of the American Association of Workers for the Blind.

1907 The School moves to its present location on Taylor Avenue in Parkville.

1909 Newcomer Hall and four cottages are built, beginning the first cottage system for the instruction of the blind.

1970 The Health Center was named for Miss Sallie Mae Bledsoe, a nurse at MSB for 50 years.

1972 Under Superintendent Herbert J. Wolfe, a facility was designed for the multiply handicapped students afflicted by the rubella epidemic of the late 1960’s.

2017 MSB dedicates the new Preschool, Early Learning and Outreach Center, the I Can, I Will, I Must Playground, and the Blanton Student Recreation and Career Center in Russo Hall. Renovations on Newcomer, Case, and Campbell Halls commences.

2018 W. Robert Hair is appointed Superintendent and becomes the 13th leader of the school.